OUR 3 RULES TO A HEALTHY AND LOVING RELATIONSHIP 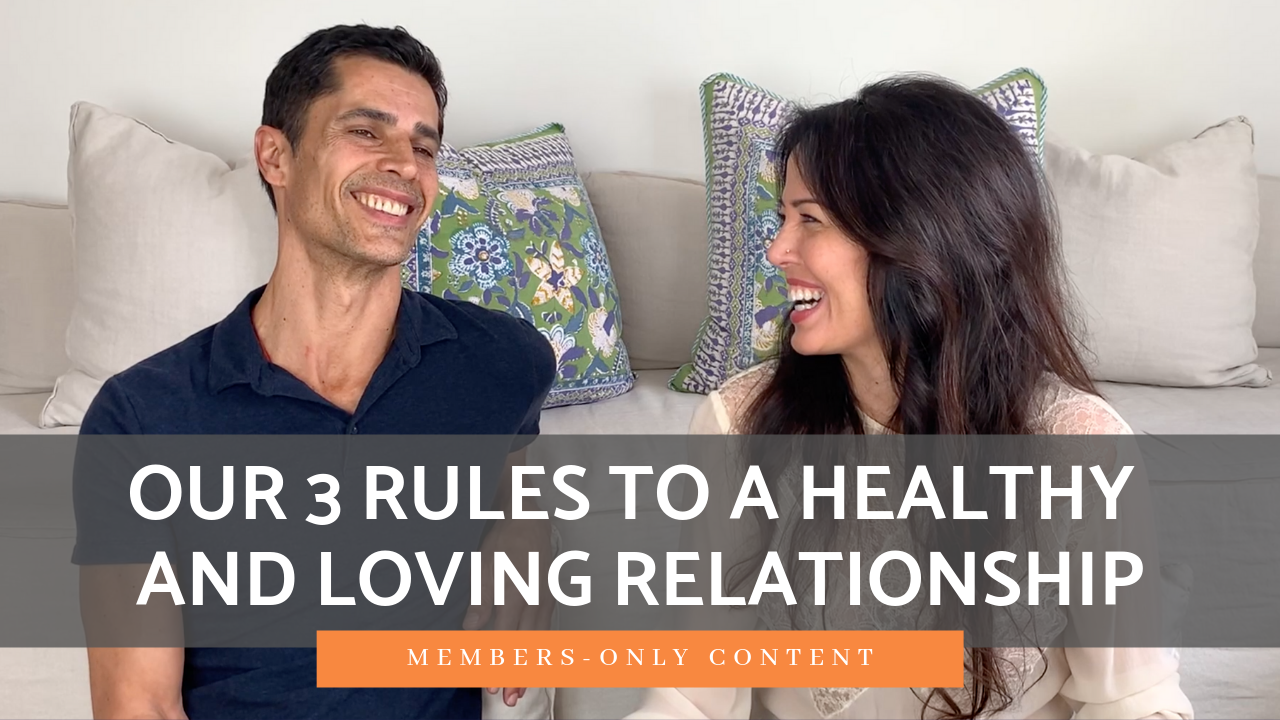 Yogi Cameron: Now many of you have been asking us for a while, what is your relationship secret? How do we stay together? How do we attract love? And we sat there and we thought about it for a few weeks. And we said, "What is the basis of our relationship? What keeps it sort of at the highest level?" And we found that three things kind of stick out for us. Things that help us stay in that balance so when conflict does come, we know how to get out of it or make it as peaceful as possible. So what are our three?

Yogini Jaima: They were three yoga practices. Because remember, yoga, once you move past the physical aspect is just an ever-expanding consciousness where you become aware of your actions and your responses, and you become aware of yourself as a body of energy. And know that your faculties are carriers of that energy. And you possess a lot of power with the different faculties that you possess. Which are the power of drishti sight? The power of Shruti, hearing. And the power of vak, speech. Those are three of them.

Yogini Jaima: And we understood that we are really aware of when ... For example, the power of sight. When you look at someone with a mere glance, you transfer that energy to the recipient of that glance. If you look at someone sternly and with discipline, they are going to receive that energy. If you look at someone with love and compassion, like how your grandmother or your mother looks at you, we receive that energy. And in the same way, if you look at someone with passion and with desire, they're going to feel that energy as well. And that is the power of drishti. And we're aware and take responsibility for that energy. So that if there are moments where we can dart a glance at someone that would be harmful or that would upset them, or to make a point, if it comes from ego, we don't do it. I know, myself, I just ... I look away. In fact, the moment that you just ... For me, when I look away, you pause that emotion. And you detach yourself from it. And once there's detachment and you observe it, just like everything else, it will move and shift, and that moment is gone, and then you can go back to base, which we did realize that our base is peace in the days of our life. And our base is love.

Yogi Cameron: Yeah, we're always trying to get back to peace and love. So that we agree on. We don't want any harm. If a conflict comes, it just comes because it's life. But our aim is always to get out of it as quickly as possible. Whatever we need to do. So looking away, or just leaving the room, or doing something that doesn't transfer that glance, if you're feeling really angry. But maybe you're not. If you're not, then you can look at the other person and say, "I'm confused," or, "I love you," or something that allows them to come down and calm down.

Yogini Jaima: And in the same way, you ... And you do this really well. You can look at someone who is ... Or your partner. If you see that they are suffering, you can look at them. And without speaking, with your eyes, you can say, "I see you're suffering. And I'm here for you." And it's felt. As women, we often find in relationships that we're frustrated because we're not able to communicate with our partners. And that's just the nature of the game with Shiva and Shakti. We're wired differently as women. Right? We feel and we communicate very freely. We can express that energy. That's not the way that the Shiva, the male is hardwired. So we'll often find that we can communicate freely and openly with our sisters, and our girlfriends, and the women in our lives. The females in our lives. But not so much with the men in our lives. Or in our relationship.

Yogini Jaima: So in those moments of frustration, he often ... Because we're aware of the dynamics of Shiva and Shakti, will always give me that look of I see that you're frustrated. I may not be able to express the same way that you express. But I'm here for you and I love you.

Yogi Cameron: Yeah. And sometimes I bring humor into it as well. Because humor is a great ice breaker as well. And takes us back to base often as well.

Yogi Cameron: And then the second one is the power of listening. And the power of listening, I've had to learn this a lot. I used to think I'm a great listener. And then I realized when I'm multitasking, I'm doing a whole bunch of things, I am not a good listener. So sometimes that's a case of frustration. The thing I have to do is at that moment, drop what I'm doing. Or say, "Look, I'm in something really serious at the moment. I need five minutes, 10 minutes. And I'll be with you." Again, it's that communication instead of leaving you hanging. Because sometimes they do that. And I just sort of leave the room, or I do something, and that's not communicating. So I have to learn and I've had to learn that over the last year because it's something we think we're doing well. But sometimes we're not doing well.

Yogini Jaima: Well, that's one aspect of it. The other aspect is the times that we're living in. Communication is running super fast. Our smart devices and our computers are just operating like this. And everything is moving so quickly. And it has our minds moving so quickly to keep up with it. And what happens, and it's very interesting if you observe the mind. While people are talking, your mind is already figuring out what they're saying in totality before they're even done. So in actuality, you've stopped listening to them. And you'll find that you're already responding to what they're saying before they're even done doing it. So we're in the practice of stilling the mind and deep listening. Not responding. Not having to come up immediately with something to say back the second that they're done. But just to deeply listen to what that person is saying. And you'll find that you reach a lot more understanding and a lot more wisdom is gained by that practice. In a relationship and in general.

Yogi Cameron: Yeah. And giving the other person the time to finish, they feel like they've been heard. So then they're not wanting to jump into something new. They just feel fulfilled. I've said what I need to say. And the third one.

Yogini Jaima: The power of speech. This loving speech. Affectionate speech. Knowing that our words can cut someone. They can be razor sharp. And they can do damage. Or our words can heal others and they can bring them so much comfort and uplift them. That's the power of vak. Our speech. And we're very aware of that. There's no shouting, there are no harsh words exchanged between this energy.

Yogi Cameron: So these are three things we find really useful that help us in our relationship and-

Yogini Jaima: Well, they become the foundation of the relationship and the breeding ground for loving communication, for intimacy, for wisdom, for deep understanding, and love, and compassion, and contentment, and all those beautiful things that we want to experience in a relationship.

Yogi Cameron: Yeah. Anyway, I have a lot to say. So listen to me now.

Yogi Cameron: Anyway, we hope that helps you out and happy practicing.