HOW ARE WE CONNECTED TO THE UNIVERSE? 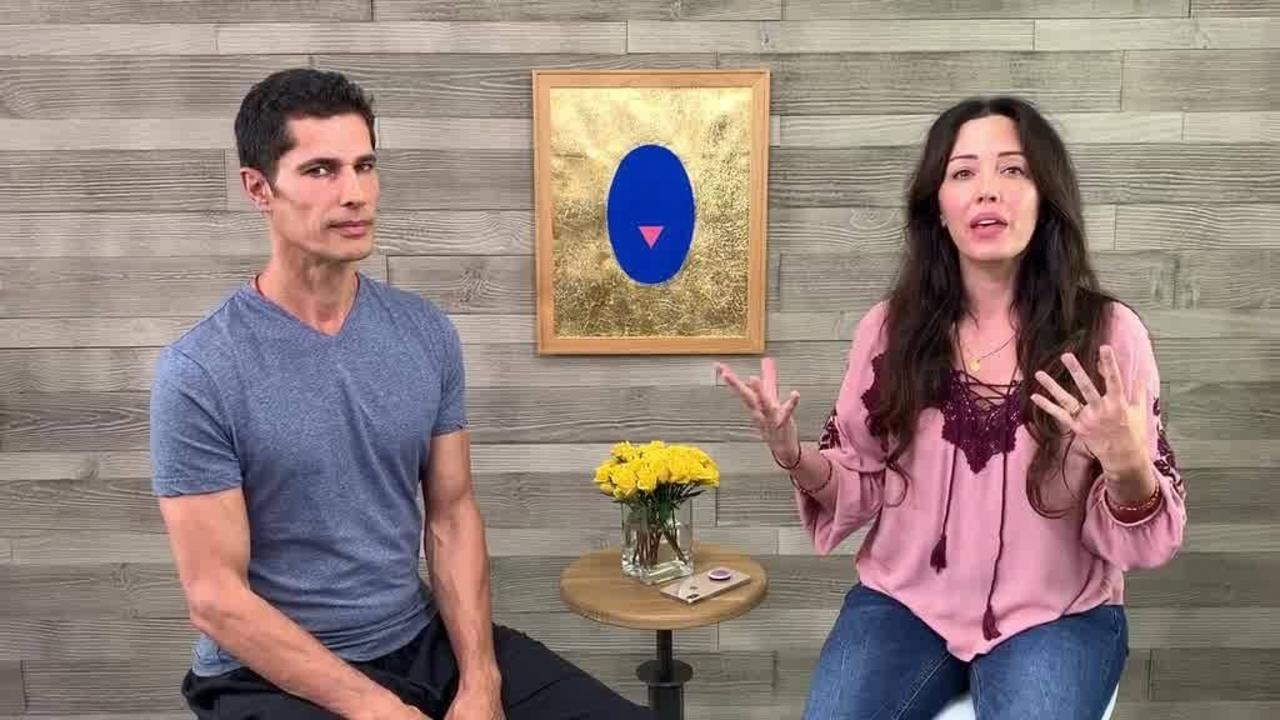 Yogi Cameron: And this is Inspire Living where we answer your most pressing questions.

Yogini Jaima: The question is: What is our connection to the universe and how do we align with it?

Yogi Cameron: I warn you, when she smiles like that, it means she really likes the question.

Yogini Jaima: I love talking about the universe. It's a great question. Let's talk about that. What is our connection to the universe? Let's start with Einstein. He said, "The idea of separation is but an illusion. We are all one thing in this universe." What is that?

Yogini Jaima: We are energy. This entire universe and manifest world in ourselves are made up of energy. Some of it is energy converted into matter and that's all the material, objects and people and nature that we see, and some of it is energy that we don't see. Like energy going through our smartphones to satellites to phone lines, right? But the energy is all there whether we see it or not. So it's to start to first become aware of yourself as a body of energy. You are made up of 7 billion, billion, billion atoms containing energy, right? So all of those atoms, they are vibrating. They're creating high-pitch frequencies and sounds, they're emitting light. You are body of light and you are directly connected to the energy body of the universe. The only Separation is that which is in your mind. So, that's the first step on understanding what is our connection to the universe. Right?

Yogi Cameron: Yeah, the universe sounds like it's a massive thing and obviously it is, and it's too far, bring it closer. What is my connection to other people, right? We have a whole universe within us as well. So we have the outer universe and the inner universe. Connect to people around you. That's already connecting with energy, universal energy because all of it is running through us. We are it and we're sharing it.

Yogi Cameron: So if the universe out there is like, whoa, that's far out, bring it closer. Start looking around you. You know how you start suddenly just stare into space and you see all the energy particles everywhere, sometimes when the sunlight is hitting the window and things like that, you see that it's everywhere anyway. So it's not that we're so far away from the universe, we are right here universally connected. So that's one way that I sort of touch with it, upon the energy with everybody else.

Yogini Jaima: And you can see it. I mean, we have a limited sense of perception in this body that we're taking this beautiful journey on; but the truth is, is that the eyes can't see everything. But it is visible when you start to expand that sense awareness. That happens in a lot of the higher yogic practices.

Yogini Jaima: One time, let me share with you, I was in a beautiful group meditation with a Shaman from South America. I had gone into deep meditation, I was in Los Angeles at our home in L.A. and when I opened my eyes, I looked out onto the city of L.A. and absolutely everything was connected. Like, the space that I was sitting with connected to the outside air, to the trees, to the lights on the street, to the buildings that ... I just saw grids of light and energy and it was just this moment that lasted for a moment and then it went back because then we drift back into our mind, right? But the deeper aspects of our mind, our sub conscience, our unconscious mind, can start to reveal that which is and that's the beauty of the practice.

Yogi Cameron: Yeah, masculine/female energy for example. That's something you can relate to. You have it within you. We consider ourselves not just man/woman, we consider ourselves feminine energy/masculine energy. It's a universal energy. It's right here. We can touch it, we can feel it. In Ayurveda, it's the hot and the cold aspect. You know, the masculine being hotter, the feminine being cooler. So we can bring it as close as we want and we can make it as far out as we want as well.

Yogini Jaima: It's becoming aware of it so then that part two of the question is: How do I align with it? First it's become aware. Become aware of yourself as this body of, your own inner universe, right? Understand that you have two polarities. Just like the sun and the moon is a positive and a negative force in the outside universe. Within yourself you have those two forces within you: the positive and the negative. They're actually divided all the Chinese and Yogic sciences will teach you that the left side is the feminine, the negative, and the right side is the masculine, the positive. These two forces exchange throughout the day, which one is dominant. You can actually tell by which nostril is more, having the dominant breath as to which energy is dominant in your body at the time.

Yogini Jaima: So when you start to understand, wow, I have these two polarities of energies that are constantly shifting in my body just like on the outside, the sun and the moon shifts throughout the day. You know, they're constantly shifting and moving, then you start to connect this body of energy with the exterior universal body of energy. And that's that first step of aligning with it is to become aware of it.

Yogi Cameron: Yeah, so, don't see it as a concept that's way out there. See it as universal energy is all around me because I am energy. And I can connect to everything that is of energy because my dog, my friend, my parents, whoever, is energy. The tree, the rock, absolutely, animate, inanimate objects, they're all energy.

Yogini Jaima: Your thoughts are energy, by the way. Your thoughts are the highest frequency vibration of energy that you possess. That's why it is so important to cultivate positive thinking because that's the energy that you're emitting out into the universe ... that's going out to realize itself and with the Law of Attraction is attracting that which you think, yeah.

Yogi Cameron: Yeah. Well, come visit us on inspireliving.co and we have a lot more things like this for you. We answer a lot more of your questions so if you're enjoying this, come and visit us there.