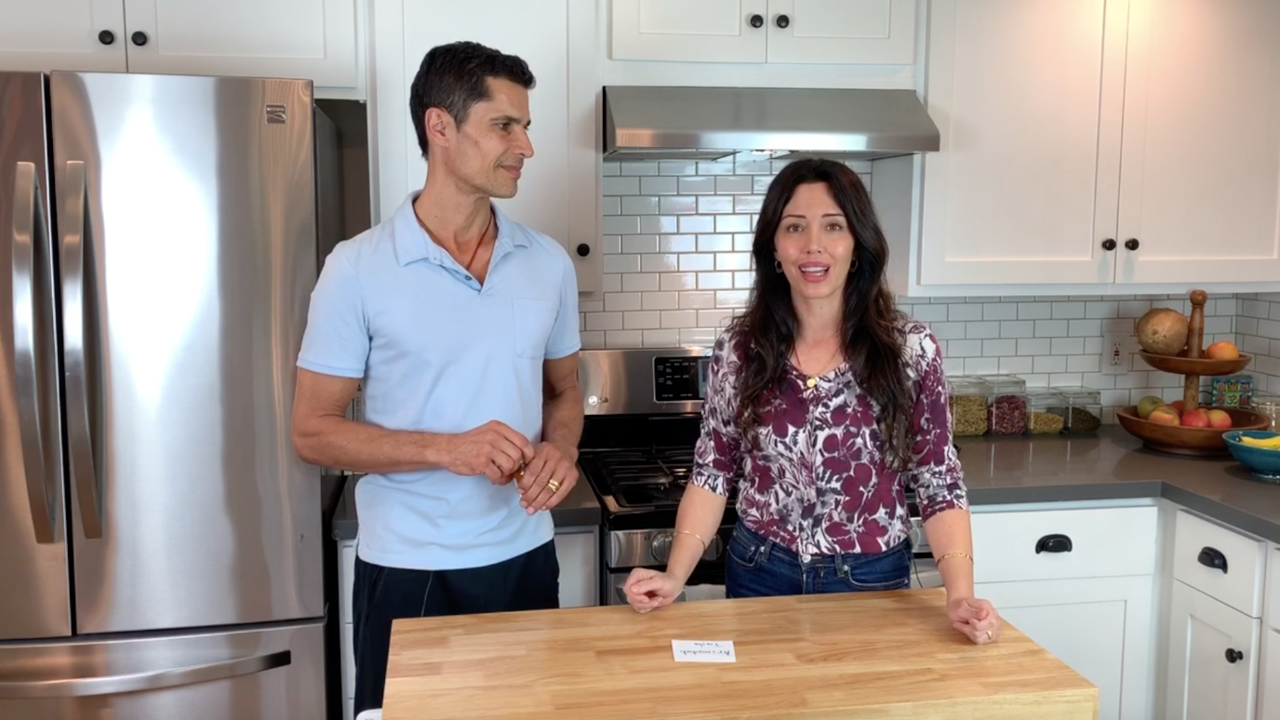 Yogi Cameron: And I'm Yogi Cameron. Now one of the great treatments and practices in our Ayurveda is gandusha and kavala. This is the gargling and moving around of oil in the mouth. Now, we do this for the health and hygiene of the mouth but we're really doing it to treat the mouth which absolutely never gets any of our help.

Yogini Jaima: Yes, and as we sleep at night, the body's resting and it's cleansing itself and detoxifying so all of the toxins build up in the orifices of the body, especially the mouth and the tongue and the throat. So, gandusha and kavala gives us the opportunity to release those toxins.

Yogi Cameron: Yeah, when you wake up in the morning, that accumulation, you see it on the tongue, it sometimes has a coating or your breath smells or something like that, so what we do.

Yogi Cameron: Yeah. These are all very natural things that happen. Now, you cleanse the mouth with an oil like this, this is arimedadi which you can get online but we're going to give you some other treatments and oils that you can make for yourself.

Yogini Jaima: But, how many herbs does this oil have in it?

Yogini Jaima: So, that's the difference between making your own oil or getting the ones that are available at the heath food stores. This oils from India, they're classic Ayurvedic blends, they are infused with 30, 40, sometimes 50, 60 different herbs.

Yogini Jaima: So they're very powerful and potent.

Yogi Cameron: Yeah, if you can stomach them, because sometimes they're very strong.

Yogi Cameron So, you order a smaller bottle, you don't need a lot of quantity, you test it out and sometimes it grows on you, as well. So, the reason we take these kind of formulations are because they are the original formulations. Now, if you don't have access to this, what do you do? That's the name of it, by the way, just so you can write it down if you want to order it.

Yogini Jaima: This was my idea, because I said you won't be able to remember that.

Yogi Cameron: In Sanskrit. So, what do you do if you wanna make your own? You can use coconut oil in the summer and you can use sesame oil in the winter. Coconut is cooling and sesame is heating. Now, you could take that oil and you can boil and simmer a little bit of neem powder in there or neem oil or liquorice, as well, you can use.

Yogini Jaima: Liquorice will make it a little sweeter, because the neem is very bitter.

Yogi Cameron: Yeah, so if you're using, let's say sesame oil and neem oil then just keep to that, you don't need to cook it. But if you're using the powder form then you're going to need to warm it up and boil it a little bit, because what's gonna happen is the herbs need to get into the oil itself. And then the quantity that you use is probably about four or five tablespoons. You put it in the mouth, you put the head back, and you first do the gargling aspect of it, because what happens when you move, the aspect where you move the oil in the mouth, you get way, way too much mucus coming out and then you don't wanna gargle after that. So, you just put it in the mouth, you close the mouth and the oil should be warm, not hot, and you gargle. You go through the process of gargling once or twice, you breathe throughout the process. And then, once you've done it three or four times, then you start moving the oil in the mouth. Now, if you've been gargling and you've got a lot of mucus, then spit it out and then take new oil and start to move that.

Yogini Jaima: And not too much oil in the mouth.

Yogini Jaima: It should be just enough to swish around your mouth comfortably because you're gonna start to add mucus to that and there will become more liquid in the mouth.

Yogi Cameron: Yeah and the indication of when you're gonna spit it out, once you've taken it through the teeth and moved it around, maybe will take you a minute or two, maybe less. The indication is when there's a lot of that watery mucusy feeling in the mouth, then you spit it out.

Yogini Jaima: And the longer you do it, the more mucus and toxins you're gonna pull so the better it is. Classically, you should do it for 10, 15, I think Ayurvedic techs say 20 minutes.

Yogi Cameron: If you can.

Yogini Jaima: But, that's a long time to do the practice so the longer that you can do it, the better.

Yogi Cameron: Yeah. So, daily is great, weekly is fine, once a month is good, too.

Yogini Jaima: So, this is a great practice for mucus, it's a great practice to nourish this entire region for people that speak a lot. Teachers, singers. We had a singer, the woman's last detox that we did, and she called us the day after the retreat was over and said that she was in. It was now gandusha and kavala for life because she noticed such a difference in the quality of her vocal chords being nourished and in the mucus reduction.

Yogi Cameron: Yeah, it gives you a much bigger range if you're a singer, especially. So, try it out, like everything, we always say try it out, see how it works on you and then modify it the way you need to but the more of this you do, the more you'll see that your health will keep elevating. Namaste.